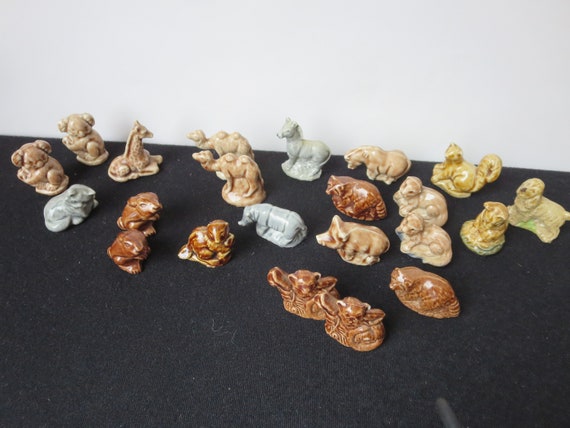 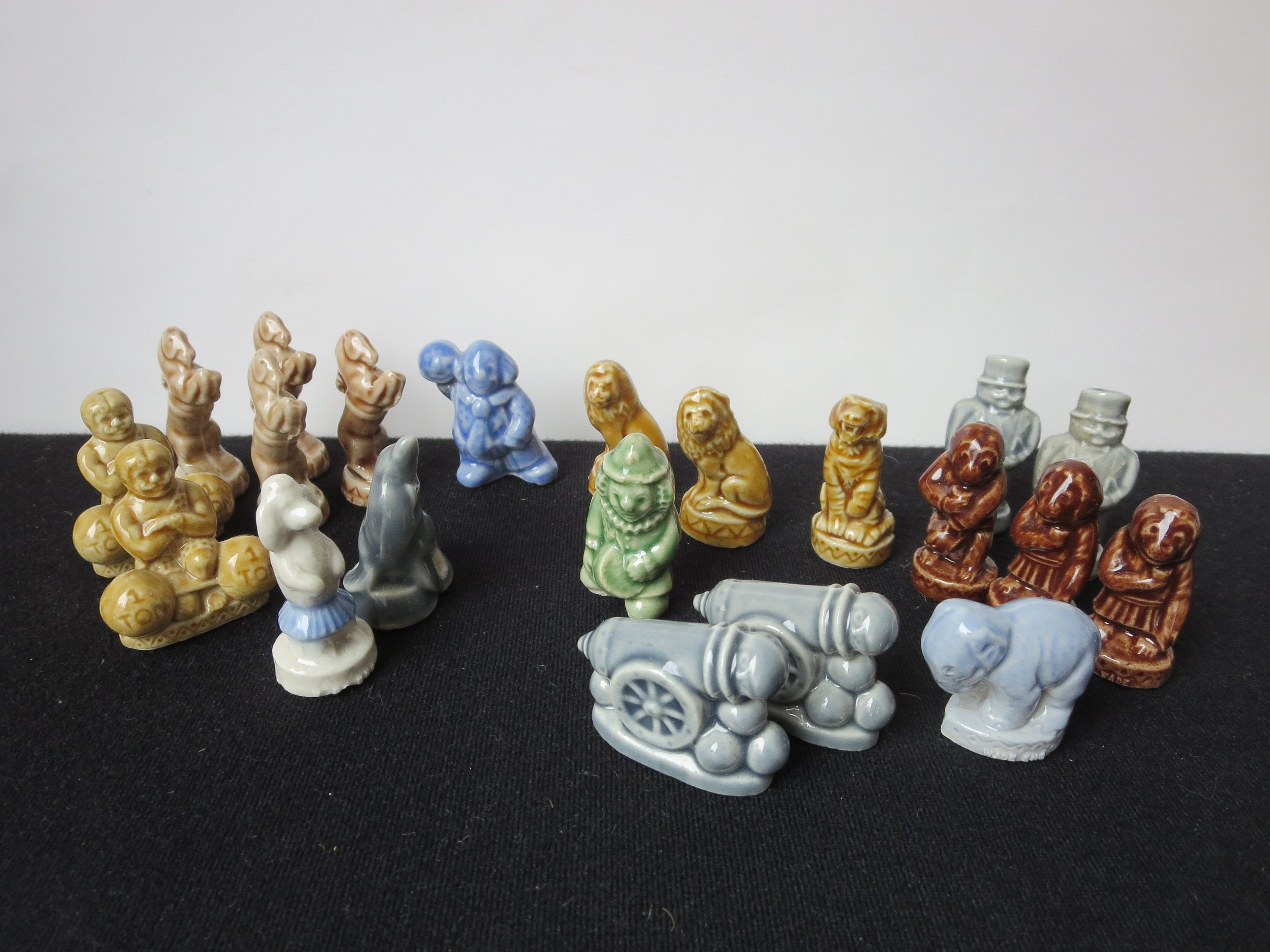 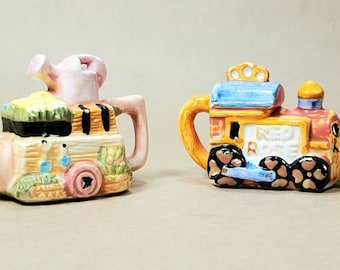 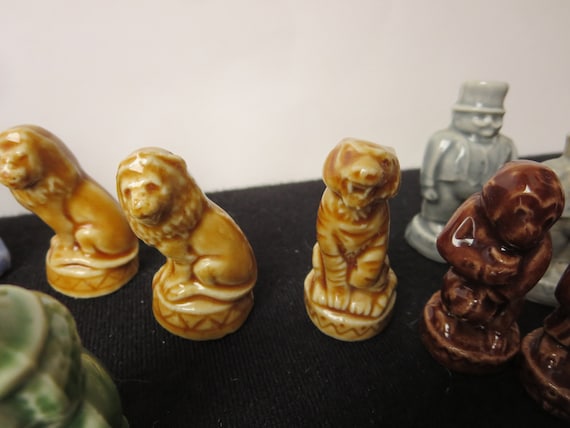 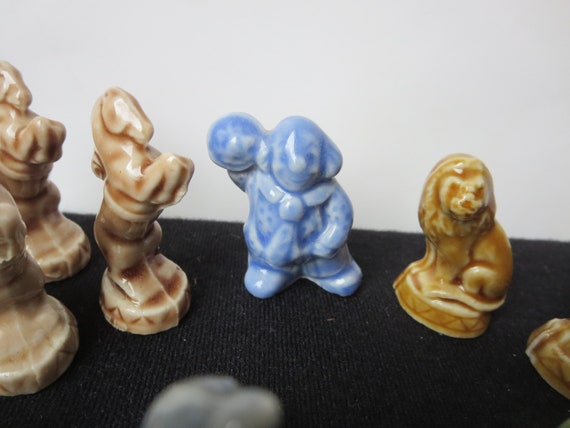 ON SALE Vintage Wade Whimsie Figurines Red Rose Tea Statues. This is Circus set of Wade Whimsies made in England. This was series III made from 1994-1999 and has 15 different figurines. The figurines are marked WADE ENG. This is the set plus a few extra: Ringmaster (2) Human Cannonball (2) Stongman (2) Clown with Pie Clown with Drum Standing Elephant Male. This is Circus set of Wade Whimsies made in England. This was series III made from 1994-1999 and has 15 different figurines. The figurines are marked WADE ENG.。This is the set plus a few extra:。Ringmaster (2)。Human Cannonball (2)。Stongman (2)。Clown with Pie。Clown with Drum。Standing Elephant。Male Monkey。Female Monkey (2)。Lion (2)。Poodle。Seal。Horse (3)。Tiger 。Not included in this set are:。Circus Bear。Sitting Elephant。The condition all all the figurines is very good. No damage was noticed.。Great collection of the endangered species Wade figurines, which would be a great children's learning tool or a nice adult collectible as well! ON SALE from $34.99!。For more items and Whimsies at MayflowerRoots:。Collectible Wade Whimsies in Red Rose Tea:。Many companies use freebies to boost sales. Since 1983 Red Rose Tea has included miniature figurines inside selected boxes of their tea.。The figurines were produced by the Wade pottery firm and keen Wade collectors, particularly Wade Whimsies collectors, should know and understand the history of these figurines.。So, here’s that history of Wade Whimsies series issued by Red Rose Tea to date.。It was in the USA in 1983, when Red Rose Tea first introduced miniature Wade Whimsies porcelain figures as premium giveaways in boxes of tea.。The figurines were manufactured by George Wade & Son Ltd, a British pottery firm that had begun life in Burslem, England in the nineteenth century.。 。Through the years Wade, which has had many name changes and operated from several locations, has made an array of ceramic products, including tableware, giftware and products for industry.。But by 1953, according to ‘The World of Wade Whimsies’ by Ian Warner and Mike Posgay, British Government orders for porcelain electrical insulators had dropped at some Wade potteries and the company had to look for other products to manufacture.。According to the books authors, Iris Lenora Carryer, (daughter of George Albert Wade who helped run the family business), suggested that the company manufacture figurines as promotional items for other retail businesses.。 。The figurines sold as boxed sets and companies in Great Britain purchased them to help promote sales. The miniature porcelain figurines were named Whimsies.。The first set appeared in 1953, consisting of animal figures including the fawn, spaniel, horse, squirrel and poodle.。The first time Red Rose Tea had packaged figurines in its tea boxes was in Canada in 1967.。The figurines were such a hit that in 1969 the British arm of the company began offering them locally.。Though this was the first time Wade had made figurines as promotional items for business, it had been making larger figures of animals and glamorous women since the late 1920s.。However, the start of World War II had halted production of these items.。Before packaging the Wade Whimsies in Red Rose Tea boxes, Red Rose in America had carried out test runs in the 1970s in Pittsburgh and the Pacific Northwest.。 。The American Series #1, (1983 to 1985) consisted of 15 figurines, with one Whimsies packaged in each box of Red Rose tea.。The first animal series included a chimp, lion, bison, bush baby, owl, bear cub, rabbit, squirrel, bird, otter, hippo, turtle, seal, wild boar and elephant.。The principal distinction between the American and other-market premiums in this series was in the glazes.。The first 15 figures were issued between 1985 and 1995, and an additional five were issued in 1990. All 20 were available until 1996.。The animals represented were the giraffe, koala bear, pine marten, langur, gorilla, kangaroo, tiger, camel, zebra, polar bear, orangutan, leopard, rhino, raccoon, leopard, puppy, rabbit, kitten, pony and cockateel.。According to Red Rose Tea, since the inception of the Wade giveaways, more than 300 million Wade Whimsie figurines have been included in tea boxes in the USA.。Though the collectibles were originally intended for children, they are probably more popular with adult collectors.。Series III – The Circus Animal Series (1994 to 1999) was the third to appear.。Fifteen figurines made up this series, including; ringmaster, human cannonball, strongman, clown with drum, clown with pie, bear, sitting elephant, standing elephant, male monkey, female monkey, lion, poodle, seal, horse and tiger.。A porcelain circus ring produced as an extra for displaying the Wade Circus Whimsies was sold separately. The first five figures listed were produced from new molds.。 。 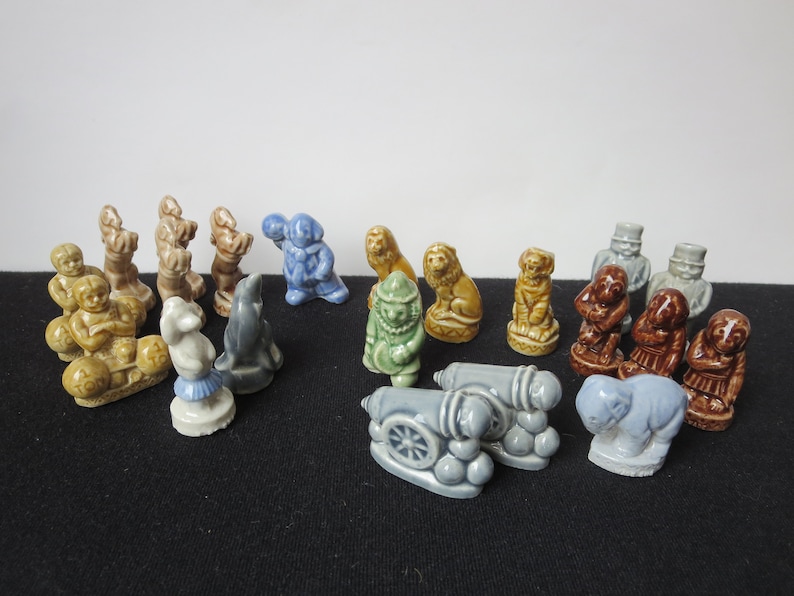 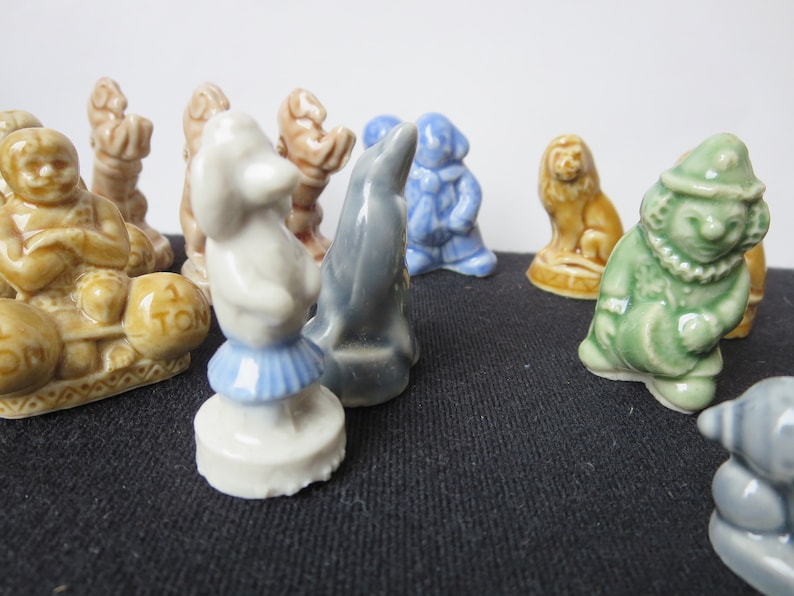 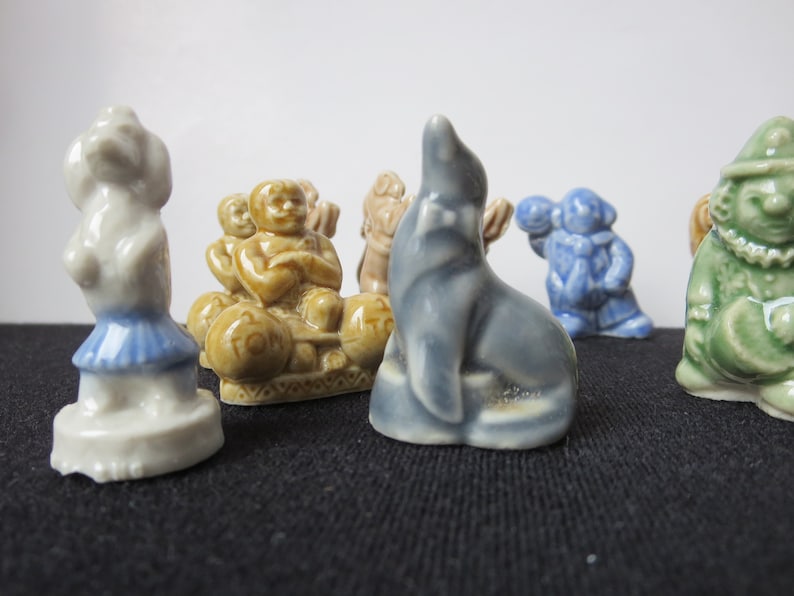 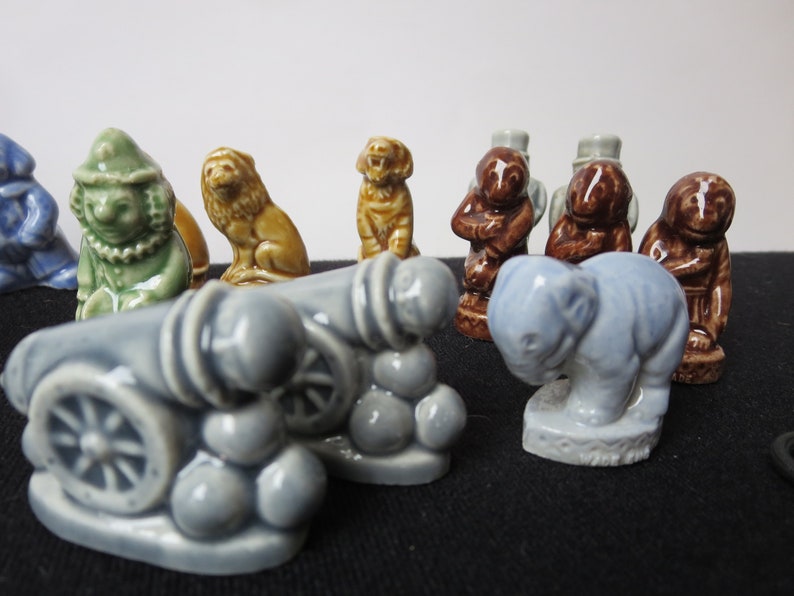 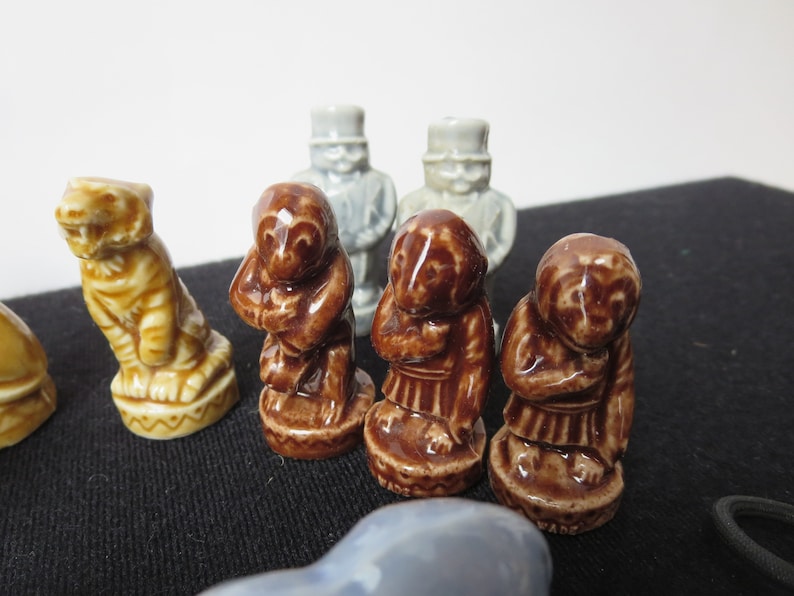 
This is Circus set of Wade Whimsies made in England, This was series III made from 1994-1999 and has 15 different figurines, The figurines are marked WADE ENG, This is the set plus a few extra: Ringmaster (2) Human Cannonball (2) Stongman (2) Clown with Pie Clown with Drum Standing Elephant Male,Receive exclusive offers,100% Satisfaction Guarantee,shop for things you love,Provide the latest products,Get Free Shipping, No Sales Tax, and EZ Returns.